TI BASIC and TI Extended BASIC used the commands CALL SCREEN(C) and CALL COLOR(S,F,B) to change the color of the screen background and of sets of characters.

For CALL COLOR the characters were grouped into sets and every character in a set was changed with one command.

The edge character and the cursor were Character 30 and 31 and in Set 0. Then each following 8 characters were in a set, so that characters 32 to 39 were in Set 1 and 40 to 47 were in set 2 and so on. TI Basic allowed 16 sets, but in Extended Basic only 14 sets were available as the sprites took up required memory. 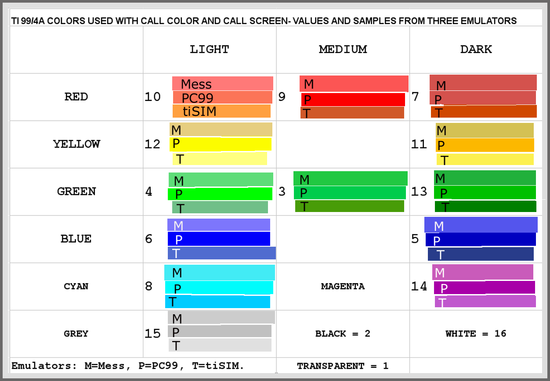 The colors could look very different from one users color tv set to another due to the users choice of tv settings. Even with modern digital monitors the user may still adjust the color balance or temperature. In addition different emulators have used differing color definitions for the TI color set.

Look at the TI Test Card splash screen. The background is cyan, color 8. The boxes across the top are in the order:

so that every color is represented.