From time to time, on different forums, people come up with pretty interesting ideas for programming, which typically get lost over time. Here, we shall collect those ideas and invite everyone to contribute and maybe to come up with an impressive realization!

Originally a TI BASIC program, it was first slightly enhanced to run in Extended Basic using DISPLAY AT commands, featuring a highscore list. A next enhancement step should be the application of sprites. 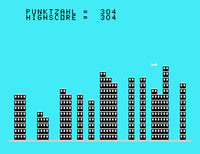 Game ports are re-implementations of games on other popular platforms, in particular the C64. For most of the time since the release of the TI-99/4A, users and programmers adopted the view that the TI is not well suited for gaming. On the other hand, recent developments show that much of the potential of the TI has never been exploited. On the bottomline, it was not due to the inferior hardware but due to a lack of smart programmers.

Gridrunner is a classic game on the VIC-20 and C64. The player controls a shooter on the bottom edge of the screen and must destroy the worm-like creatures on the grid. Other opponents drop kind of eggs on the grid, which change state after time, finally dropping some ball towards the player. A really fast-paced game with high addiction factor.

Challenge: Create a Gridrunner port on the TI-99/4A.

Attack of the Mutant Camels

This game remotely resembles the fight against the AT-AT in the Star Wars V movie and was the first C64 game I encountered. I was strongly impressed by the gameplay, which is not really complex, but addictive enough to spend several afternoons with it.

See a screen video on Youtube. [1] and the snapshot from MESS.

Attack of the Mutant Camels

Challenge: Create an Attack of the Mutant Camels port on the TI-99/4A.