Difference between revisions of "Troubleshooting"

So your good old TI does not feel good recently? Or you have bought a console or expansion on the Internet and wonder whether something is wrong, or whether you just don't use it correctly?

We will discuss some trobleshooting strategies on these pages.

Sometimes you can find weird screen outputs on real TI consoles, some of them shown on Ebay. In most cases the problem is a defect RAM circuit. The video memory is implemented by 8 circuits of TMS4116 (16K x 1); that is, each circuit hold exactly one bit of each byte.

Thanks to MESS, we can simulate various failure symptoms. For instance, when we apply an AND operation with byte 0x7F to every byte written to VDP RAM, the effect is the same as if the memory circuit for the leftmost bit has died - because the binary representation of 0x7F is 01111111. Likewise, if we AND the value 0xBF on each byte (0xBF = 10111111), the result should look as if the second RAM circuit is defect.

From experience we can say that dead circuits should cause these stuck-at-0 symptoms; we never saw a stuck-at-1 or other cross-dependencies.

If you found your screen output in this gallery, you will have to replace the failing video RAM circuit on the board. The video RAM is on the left side: 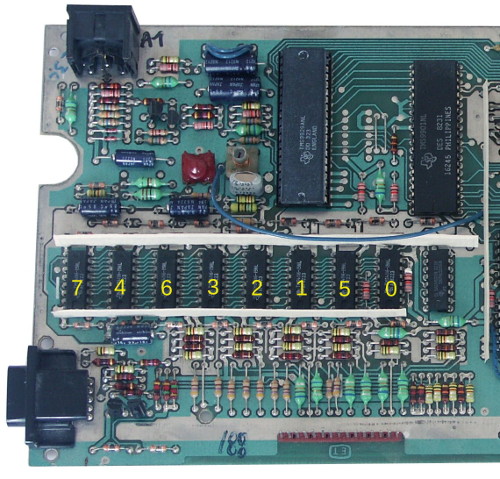 The image shows the bit numbers on the circuits. Note that Texas Instruments uses a big-endian bit order, i.e. bit 0 is the most significant bit (27), and bit 7 is the least significant bit (20). Accordingly, if your failure symptom is Mask 11011111, this means bit 2 is stuck at 0.

These are the error codes from the PHP1240 Disk Controller Card (the original TI disk controller). They are usually only seen during operations of the Disk Manager cartridge.