Very few peripheral cards were desgned specifically for the TI-99/8. All of them are much more difficult to find than the TI-99/8 consoles.

The 128K Memory Expansion adds 128K of CPU memory to the TI-99/8. This additional memory can be utilized by programs written in Extended BASIC II or using the UCSD P-System. It is possible to place multiple memory expansion cards into the PEB to further increase available memory. Each card has a set of four straps on an extension tab extending out the back of the PEB, three of which are used to set the base address for the card. On some cards the straps are resistors, though they may also be set up using micro-switches. This card cannot be placed into a PEB connected to a TI-99/4A, as it will damage the system.

The 256K Memory Expansion adds 256K of CPU memory to the TI-99/8. This additional memory can be utilized by programs written in Extended BASIC II or using the UCSD P-System. It is possible to place multiple memory expansion cards in the PEB to further increase available memory. Each card has a set of four straps on an extension tab extending out the back of the PEB which are used to set the base address for the card. This card cannot be placed in a PEB connected to a TI-99/4A. This card is much harder to find than the 128K Memory Expansion.

This card connects the TI-99/8 with a Revision 1 motherboard to the PEB. It contains no specialized chips and could be easily reproduced using a TI prototyping board. The cable between it and the 50-pin Centronics interface on the console is one-for-one straight through, connecting all pins. The pin-out for this connector is very different from the pin-out for the Flat Cable Interface, although it uses the same signals. It is possible to build an adapter to use this Interface with a Revision 2 motherboard.

Two different versions of this card exist: an early developmental prototype with an extremely complicated chip set and a lot of wiring modifications and a preproduction version with an optimized component set. A small number of the preproduction version are known to survive (10-30 examples), while only one of the prototype version is known to exist. Schematics for the developmental version surfaced in December 2007 and provided significant additional information. The additional chips on the board (empty sockets on the one known prototype) were to hold a 99/8 DRAM Controller Chip (Pollo), three PALs, and 32K of memory. It is probable that the 32K of memory is present on this version of the card to allow modules such as the TI Editor Assembler and TI Logo II to work properly with the TI-99/8. The chips and components on the remainder of the board are identical to the standard Flat and Round Cable Armadillo Interfaces.

In December 2007 schematics for this version of the Armadillo Interface surfaced. The card is effectively identical to the round cable version, with the exception of the connector pin-out. The pins do not allow straight-through wiring of the cable, as they are not in the same order as the pins at the console end of the cable.

This card is a functional clone of the original Flat Cable Armadillo Interface. The connector pin-out at the card has been altered to allow use of a ribbon cable. A total of 10 copies of this board were produced in January 2008. Below are pictures of the card and another of the console side connector. The side connector will fit into a standard Radio Shack kit box to increase connection stability. 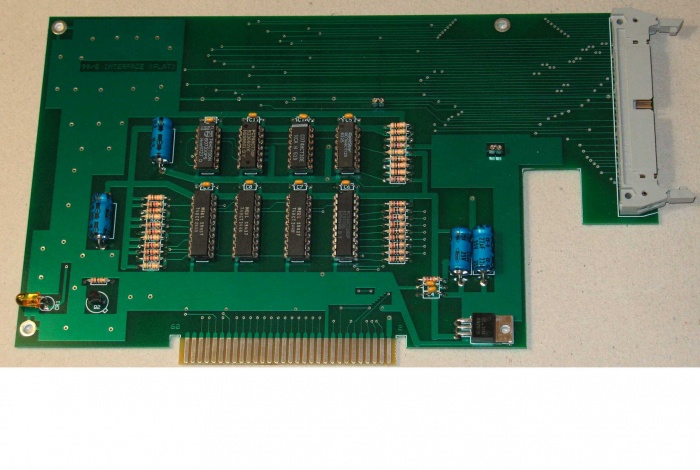 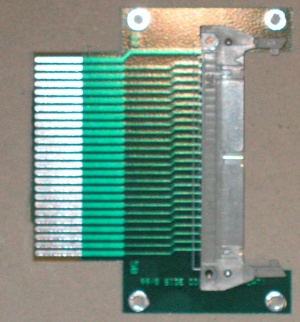 This card is actually a standard RS-232 Serial Interface card for a TI-99/4A using an updated Device Support Routine (DSR) to make it compatible with the TI-99/8. The Source Code for the DSR is available, so any TI RS-232 Card could easily be modified for use with the TI-99/8. Very few examples of this modified card exist.

Texas Instruments designed the Hex-Bus peripherals to work using a standardized serial interface operationally similar to the system later used by the Universal Serial Bus (USB) on PCs. Several TI computers could take advantage of this interface: the TI-99/8, the TI-99/4A (with the Hex-Bus Interface), and the CC-40. Several of the Hex-Bus peripherals only exist in prototype form, and those that did make it to market were only produced for a short time before TI withdrew from the home computer market.

Peripherals connected through the HexBus port may operate more slowly than their counterparts in the PEB, as the data transfer rate on the peripheral bus is higher than HexBus allows. This minor limitation is most noticeable with the Floppy Drive/Controller.

The complete Interface Specifications for all of the known Hex-Bus peripherals are located on the WHTech FTP site.

This controller formatted disks to the standard TI single-density formats (90K per side for 40-track disks) and could be used to format them in double density using 16 sectors per track (160K per side for 40-track disks). The manual for this peripheral also indicates that the hardware could be used with 77-track disks, but that the current disk manager and DSR software did not yet implement this capability. This manual is also located on the WHTech site. 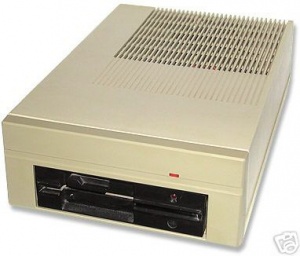 The RS-232 Interface is one of the most common HexBus peripherals. It allows connection of a serial printer to the rear connector. It also has a parallel port, however accessing the connector requires the case to be opened so that the cable can be threaded into the device. The manual is available on WHTech.

The Wafertape drives were a good idea gone bad. The plan was to make a high-speed tape storage device that would be less expensive than a disk drive. It worked too--but there were extreme reliability problems. Tapes could rarely be read in a drive other than the one they were originally written in, and even then reading or writing data to a tape was highly error-prone. The drives themselves were prone to rapid breakdown. Between 100 and 150 prototypes of the Wafertape drives were built--though very few surviving examples are functional. This problem was not unique to TI. The Sinclair Spectrum, Coleco Adam, and the Schneider CPC64/CPC128 also used Wafertape systems (also known as Stringy Floppies) for a while, and Mechatronics attempted to build a version to interface with the TI-99/4A. They were not popular in any implementation that actually made it to market.