Starting up the system

If the console is working correctly, power is attached, and the console is connected to a TV set, you can simply move the front switch and be greeted with the Master Title Screen 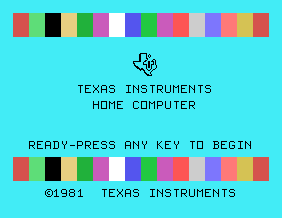 As the screen says, press any key to proceed to the cartridge selection. In this case here, we have started the system with the Editor/Assembler cartridge plugged in, so it appears in position 2, right after the console built-in TI BASIC. 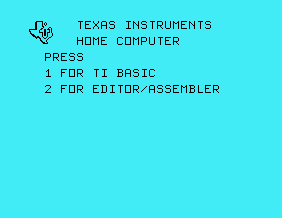 We proceed directly to TI BASIC by pressing 1. 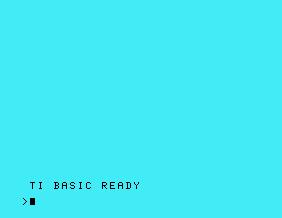 or you can start to enter a BASIC program just by writing a line number before your BASIC command.

All BASIC lines will be arranged by their line number. You can run the BASIC program at any time by using the RUN command

Clear your program space with

You call clear the screen without losing the program by

This is one of the numerous CALL subroutines of TI BASIC.

If you want to leave TI BASIC, use

This command closes all open files and returns you to the Master Title Screen. You can also press QUIT (FCTN-=) which will not close files and thus may lead to data loss (if there are open files). Keep in mind that your BASIC program will always be lost when exiting BASIC unless you save it to cassette or to floppy disk:

If you want to retrieve your program from the data storage (cassette or disk), use the OLD command:

How to check the contents of a disk

Situation: You have inserted a disk and wonder how to find out which files are stored on it and whether there is free space.

The disk directory is a pseudo data file and must be opened and read with the usual disk operations.

There are three ways to do that:

lists the contents of the disk in drive 1. Analogously, drive 2 or 3 can be queried, and you can also provide full pathnames like

which would attempt to list the contents of the BASIC subdirectory on a device called WDS1 which is usually the first hard disk attached to a suitable controller like the HFDC.

Option 1 is preferred when you write a BASIC program that should also be able to process the disk directory contents. It is not recommended for quickly checking the contents while you already have another BASIC program in memory since you would lose that program when you load the directory reader program.

Option 2 was the standard way until more sophisticated disk controllers became available which also offered those subprograms. For instance, the original TI Disk Controller did not offer these convenience routines, so you only had option 1 or this option.

Option 3 is the preferred way if you have a suitable disk controller. Just try the call shown above to check out.

Note: Do not mix up this command with CALL FILES which is used to allocate memory for operations on more than one opened file.

How to run an unknown program

Situation: You have inserted a disk and wonder how to get the programs running which you find on it.

As with most systems there are two types of files:

In most cases, executable code is stored in PROGRAM files.

They must be loaded at the exact same positions in memory. Apart from them, there are files with other formats, also containing executable code:

That is, these files must be loaded by a special loader (which is part of the Editor/Assembler cartridge, but also of the Extended Basic cartridge). This loader is able to place the contents in almost any memory location, automatically adjusting references to addresses.

These files may be created in Extended Basic. They are used when you want to merge several files to one single BASIC program. For instance, you can store subroutines in MERGE files and select those that you need when running some application.

If you find a PROGRAM file it is either BASIC or Extended BASIC or a memory image machine language file.

BASIC: Get into BASIC, type

If you don't get an error message, do a LIST and see whether there are strange characters in the listing and whether the BASIC interpreter outputs very sluggishly. This means it's actually Extended Basic. Do the same with Extended Basic plugged in and selected.

If you get an error message, it is likely that this is no BASIC program. Plug in the Editor/Assembler and load the program via option 5 by providing the file name DSK1.SAMPLEFILE

If it is a DIS/FIX 80 file you need to load it in Editor/Assembler, use option 3.

Sometimes the file contains an autostart tag. If not, you will need to provide a name by which the machine language program has been registered. This can be a bit difficult to find out. If you look at the file in an editor, you can find some names near the end of the file. One of them may be the proper program name.