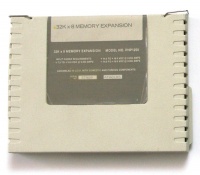 Do It Yourself 32k Memory

There are several available designs for internal memory expansion inside a TI-99/4A console.

Thierry Nouspikel details a proposed schematic for a PEB expansion card (labeled as untested). The Jedimatt42 sideport prototype design confirmed 95% of this circuit, except control of RDBENA (the flex cable bus transceiver). The sideport expansion was then refined to remove some of the bus buffers in the final version.