Hard disk drives (short: hard disks or hard drives) are vital parts of our current computer technology, but around the start of the 1990ies, they were still pretty rare in home computing. Even sophisticated systems of those time like the Commodore Amiga did not offer hard disks in their standard setups. With the success of PC platforms, hard disks became increasingly popular and - most importantly - affordable. The DOS operating system of PCs got its name from the term "Disk Operating System", by the fact that the operating system had to be loaded from a disk rather than being burned into ROMs. In the early days, DOS was distributed on 5,25" diskettes; starting with MS-DOS 3, hard disks became standard.

Not surprisingly, hard disks were also very rarely used with the TI-99/4A. There was indeed a Winchester drive sold by Texas Instruments, but it was mainly targeted at professional environments. (Price?)

Around 1988, Myarc created and sold the Hard and floppy disk controller card which finally allowed to attach the new inexpensive hard disks that were also used in PCs. Later, SCSI controllers became available and also an IDE controller. 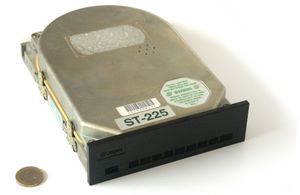 MFM hard disk drives are, from a technical point of view, heavy floppy drives which do not allow for changing the media. Indeed, they do not share much with the currently available, more intelligent drives, except for the fact that something is spinning inside. The Seagate drives are the most popular ones, with capacities of 20 MiB or 40 MiB.

These hard drives offer an interface which was considered as a standard and named after the ST-506 (5 MiB) and ST-412 drives from Seagate. The successor to this interface was the IDE interface.

The interface requires two separate cables. The "A cable" (right connector) has 34 lines and includes control lines for stepping and drive control. The "B cable" (left connector) has 20 lines and transports the data to or from the disk by differential signals.

(The photography of the connectors must be turned upside down; in the picture, pin 2 is right, on the bottom.)

RLL drives differed from the MFM drives in the algorithm for encoding the bits on the medium. This encoding must be understood by the controller, but the HDC9234 chip on the HFDC can only handle MFM. Thus, these drives cannot be used with a TI system. RLL drives had the same connectors as the MFM drives.