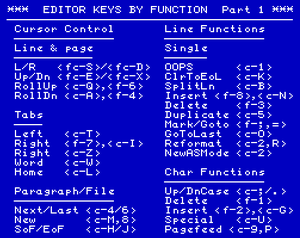 The Funlweb editor started life looking like the editor from TI's Word Processor "TI Writer" and developed from there.

This article is heavily based upon a review by Charles Good in Micropendium magazine and has used the documentation files supplied with the software.

An asterisk by a file indicates a fractured file.

(P)rotect and (U)nprotect of files now use these more obvious keys. Pressing (T) marks the Display/80 file under the cursor bar in the directory as the LoadTemp file, and pressing <space> marks the Workfile, and pressing <O>riginal restores these to their values at entry to SD. Exit from SD is by (ctrl-=).

A one way paged file view function is implemented using <V> when a Display/80 file is between the cursor bars, and can scroll through files of indefinite length.

Note that Load will now handle both American and European files transparently - in Germany a none-standard TIW Vn 2 was marketed which produced files US users could not read. This is now not an issue to Funlweb.

U - does similarly for Unix format with (lf) separators and (ctrl-D) at end of text. M and U both cancel the L option for line numbers.

P - if a printer start-up control code sequence has been installed this will be sent to the print device before any text records.

Q - if a printer reset control code sequence has been installed this will send it to the print device after all text records have been output.

A - opens the DV/80 output file in Append mode. This will help editing or construction of very long files.

Several new command line 2-letter entries have been introduced in various categories. An important and the most obvious change to command mode is that text may be scrolled by line or page using the normal set of up/down scroll control keys. This allows the text to be inspected anywhere during command line entries, so that line numbers do not have to be remembered for large Copy/Move/Delete operations. The new entries are specified here by their English language version.

for Help mode brings up a series of help screens which are loaded from the Funnelweb disk with paging between them by (Q,A) and exit by (ctrl-C)

for Quick Quit back to F'Web. The editor maintains a "file-edited" flag, and if any text entry has been done since loading or saving the current file, a reminder to save the current work first will be issued.

The temporary loadfile name may be entered directly, or marked in SD with (T). This allows for inserting all or part of external files into the edit workfile without disturbing its name.

Set showDirectoryPrinter name. This allows the device name used by (c-P)rint Directory in SD to be preset to something other than the PF name. It is initialized to the PF print device at load time.

for MarK position in file. This sets a marker after line number entry, or else enter this with <ctrl-M) at the current top line, which may be scrolled to any line in the workfile while still in CMD mode. (fctn-;) in Edit mode is an alternative method.

for choice of WildCard character for use in FS/RS search strings. This is initialized as the "*" character.

( )- a blank CMD line. On the main CMD line this returns to the Edit mode at the original exit point.

eg (52) from the main command line a number acts like a Show lines command. "E" for EoF is not recognized in this direct return as a letter may conflict with other commands. You can just use a big number, say 2222, instead of (E) but it is easier to use (S ) for Show line.

Control number one - exits from command mode to the current top of page. It has the same effect as (c-M) followed by (enter)

Note that if you are using the pc99 emulator with default keyboard mapping, CTRL 1 is not directly available, the fastest solution is to use CTRL and M then ENTER.

Is no longer available. Ooops line recovery is available on (Ctrl 1) - control and number one.

Find/Replace String commands now take up to 3 numbers ahead of the string entry. Two numbers give the start and finish column for the search. For 3 numbers or 1 number the first or only number is the number of match occurrences to skip before stopping.

This is only a subset, see the documentation for a full list. Also refer to the original TI Writer quick commands article.

These changes allow more use of the left hand alone for quick key editing functions.

(ctrl-Q) pages towards the start of file

(ctrl-A) pages towards the end of file

(ctrl-H) shows the first page of the file.

(ctrl-J) shows the last page of the workfile.

(Ctrl-N) in Edit mode now inserts a New line to match usage on PCs, as in Borland editors.

(fctn =) system Quit key remains disabled at all times while in the Editor, including SD.

A right margin warning beep has been incorporated as a beep occurring 5 spaces in from the right margin during typing.

Alpha case conversion is provided, in either Edit or Command modes. (Ctrl-;) converts a lower case letter under the cursor to upper case, and (ctrl-.) below it on the TI99/4A keyboard converts upper to lower case, with auto-repeat.

This is an option, a minimal version without the multi-language options is also to be found.

By holding down the space bar as the editor is loading into the computer's memory you are given your choice of the following languages; English, French, German, Dutch, Swedish, and Spanish. Selecting a language gives a command line written in the selected language with appropriate commands.

These include foreign language characters, mathematical symbols, and line graphics. The lines are useful for drawing pictures, designing business forms, and creating borders. They resemble the "lines" created by the commercial software Page Pro or Form Shop. Normally these >127 graphics built into almost all printers are not accrssable directly from a 99/4A or Geneve keyboard, but with the v5 editor they are.

CTRL/comma lets you switch back and forth between the normal ASCII <127 letters and ASCII >127 graphics. Everything is properly displayed on screen (WYSIWYG) and can be printed properly directly from the editor with PF (Print File). You don't need the formatter to print these graphics.

All-Chars files should print directly from the Editor to printers that support the PC character graphics set.

From a ShowDirectory display, if you move the cursor next to the name of a sub directory you can display the file names of that sub directory. Also, you can bring up a display of the root directory of the currently displayed directory from within ShowDirectory.

Scroll while in the command line.

Goto a particular line number by typing that number and <enter> in command mode.

If you change the files named ED/AEH and EE/AEH to ED and EE, you will be using a differing editor. Specifically using these files adds to the 40 column editor right margin adjust, TI EuroWriter, PC character graphics capability, and pathname functions in SD.

The negative to using ED/AEH and EE/AEH is the Funnelweb kernel can no longer be stored in VDP during Editor operation for instant reappearance on exit, but must be reloaded from the Funnelweb boot-disk.

The emulation pc99 uses keyboard mapping which prevents a few keys being passed to the Funnelweb Editor when using the CTRL key. Keyboard mapping can be changed - the following assumes default. The work around if you need to type CTRL and a number is to use the ALT key as follows.

To pass CTRL 1 to Funnwelweb editor, hold down the ALT key and then press numeric keypad numbers 1 then 3 then 0 and release ALT.

and finally to change from upper case to lower case which requires CTRL . use ALT 129.

There does not seem to be a way to key in CTRL ; when using PC99 without changing pc99 keyboard mapping.