The disk controller was arguably the first expansion card of every user, since it allowed to switch from cassette file handling to the much more comfortable disk system. Moreover, TI BASIC and Extended Basic are well prepared for disk usage, so this was a wise investment. 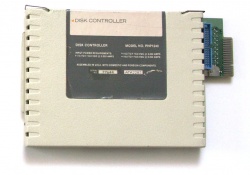 The Myarc HFDC was one of the most sophisticated controllers built for the TI computer family. It allows to control up to three floppy disk drives and up to three MFM hard disk drives; moreover, the controller was prepared to control one tape drive.

The controller makes use of the HDC9234 controller from the SMC92x4 controller family. It is capable of handling disks with 40 to 80 tracks and single or double density, for a maximum of 720 KiB. Actually, it was planned to handle even higher densities (reaching 1.44 MiB per disk), but the controller software is flawed, and the data separator cannot cope with the data rate either. Due to the common usage of 40-track drives, the most frequently used format was DSDD40, i.e. 360 KiB.

The ASCSI card was build by the System Ninety-Niner Users Group around 1997. It was based on the WHTech SCSI card, however, substantially improved with a MACH circuit and with a revised DSR. This rebuild was also a reaction on delivery delays of the WHTech card to Europe.

The card proved to be very reliable, useable with the TI or the Geneve, and very fast due to its improved DMA performance. It is based on the SCSI controller chip 53C80.

Credits for this card go to

This was the first major hobbyist-designed card built for the German market, and was developed as a response to the collapse of Atronic as a local source for Double-Density floppy disk controllers. Both CorComp and Myarc cards were still available at the time, but they were difficult to acquire in Europe. The card and its DSR were designed by three very talented individuals: Michael Becker (hardware), Christopher Winter (software), and Harald Glaab (Software). The majority of the work was done by Michael Becker and Harald Glaab, as Christopher Winter was in the process of abandoning TI development at the time the card was designed. Over 105 of these cards were sold, mostly in Europe, although a few of them were sold to US customers. It is one of the most stable floppy disk controllers available for the TI. It uses the WD1773 FDC chip, with lack of sources for additional WD1773 chips at affordable prices being the prime reason that production of additional units ceased. Most of the european cards are sold to the big TI-community of Switzerland, but nobody knows where these cards are left when the swiss TI-community disappeared...