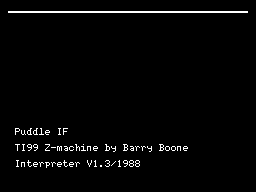 Screenshot of Puddle IF

Tom Wills was looking for information regarding Barry and there were some entries from various users and then Barry sent in a great description of things he has been involved with. The following is a comment that Jacques Groslouis sent in and then below that is Barry's response.

Jacques's Comment 1 - Apparently Barry acquired the nickname of "The Master". I can only speculate why he acquired this alias. Perhaps someone can provide more specific details. Sounds like something that should be in his bio. Barry's Comments #1 is a reference to a character in "Dr. Who", and was the BBS handle I used as a teenager. Back in the day I used to call a BBS in Houston called the "U.S.S. Enterprise" and it was the handle I used there. Later, it was also used in some cartridge dumps and other software that was released that I didn't want my name on :) One example was all those Infocom games I ported over to the TI. Other people can probably remember seeing "Broken 19## by The Master" in other software that was floating around in those days.

OK. I'm going to rattle off some things for Tom, as I've been putting off doing this for quite some time now :)

One piece of trivia on the Infocom games. Chris Bobbitt (Asgard) bought a bunch of the original packaging from a bunch of PC Infocom games from the owners of the Infocom rights, and bundled the games with my TI ported versions, which allowed them to be sold legally as TI versions. There were only a limited number sold in this manner.

I had disassembled Infocom's interpreter, and proceeded to fix a number of bugs present (such as the one which made the newer games impossible to run, basically the routine that parsed sentences could not deal with a vocabulary table larger than a certain size and would only see part of the words available on the newer games). I also made an 80 column version of the interpreter, and one which ran from Supercart space (4 of the ported Infocom games needed more RAM than could be had without moving the interpreter to the Supercart). Back then, I was a huge Infocom game fan, so most of my motivation here, aside from the coolness factor, was that I wanted to play the games :)

As a teenager I dumped many things to disk format, such as Tunnels of Doom (very challenging one to do, given its size. it was very tricky to do a GPL interpreter and all the ROMs in memory without a Supercart, but it was done with 8 bytes to spare). I was assisted in many of these projects with the help of a single step board that some company at the dawn of the TI once produced. It was a sidecar device with 8K of RAM that could be switched into the cart space, and had a load interrupt switch and a hardware debounce for the load interrupt, and was compatible with single step mode in TI's debugger. I also wrote a modified version of TI's RSBUG program, and used a serial terminal to do debugging and learning with programs that ran with graphics or bitmap.

You may have seen my disk based GPL interpreter floating around too. 13-14 sectors in size for the "fast" one which was 95% compatible with most dumped GROM's. The other was 33 sectors and was a full blown GPL interpreter, but it ran slow due to all the code running from 8 bit memory. It was however 99% compatible with dumped GROM carts. The fast version hopped in and out of the console ROM which sped things up a lot. It was the experience of doing this code that later led to the creation of EXEC for the Geneve.

Other apps. a set of XB Call Link routines to manage a MBX system to use the joystick, keypad, and speech recognition. A Ymodem-G module for GenTri for the Geneve which used hardware flow control to the modem and could support doing 56Kbits to/from the modem's buffer. A special version of FastTerm that used a similar custom protocol to send entire disks in a streaming protocol. Another project was assembler routines for XB for BBS's that I wrote/modded for some custom BBS's that ran back then.

Other code I had a hand in back then was a program called Xenon's Hacker. I don't know who "Xenon" was, but it was a wargames dialer, that later became modified to do other things like phone company LD code hacking. Theres a good story here of the "hacking" uses of the TI, perhaps one of these days I may get time and tell it :)

Things like Archiver II (which was my first take at it. it had two pieces of code which archived the data, then compressed it), and Archiver 3, which was a total rewrite and was much faster and was a single step process, using LZ compression.

There were many other projects. a track copier, Sound F/X, GIF Mania, a Myart viewer, and a GIF viewer for the Geneve that used all 256 colors, and probably a ton of other things that I will think of later :) I'd written a custom EPROM for the Mechatronic 80 column card that used a DSR and print commands to utilize hi-res mode from BASIC/XB, and do hardware windowing type functions, never released it, and wish I could locate that code now.

Fixed a number of bugs in the Mechatronic card and sent the fixes to Franz Wagenbach (and later similar fixes to Tom Spillane of Dijit Systems). Other specialized code like Systex (used to embed Assembler code into XB so that you could load an XB file which would then push the embedded assembler routines into Low memory expansion without having to use the horribly slow XB object code loader), my XB Option 5 loader to load EA5 files from XB, and a similar program to load c99 programs.

A few of my Geneve projects included EXEC, a couple of commands for keyboard input in MDOS scripts, and porting a bunch of Tomy Tutor games to the Geneve.

One of the coolest things I remember doing with a Geneve was taking an entire digitized song and coding a demo program that loaded the song off several 80 track disks into a fully expanded Geneve, then playing the entire song back using the Sound F/X routines. I demo'd that at a table at one of the various TI shows, I think it was in Chicago.

At one point in time I was an assistant SysOp on GEnie, and also spent a lot of time with a Sysop account on Compuserve's TI Forum and hung out a bit on Delphi.

On the personal side, I took a job at Creative Labs in 1993 (originally started out doing tech support and running their support BBS) and was there til late 1998 managing their global WAN network and Internet servers/routers. In 2000 I started an Internet company that does online deals and coupons, and have been doing that ever since. I also spend a lot of time with UNIX (FreeBSD, Solaris, and Linux), and managing Cisco routers for a publishing company since 1998. Side trivia, I dragged Steve Lamberti of Texaments fame to Creative in 1994, and he's now in charge of their customer support/tech support facility.